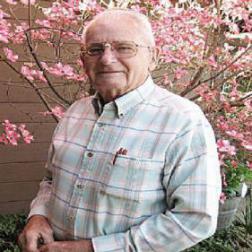 The following are the unique Irises of Bob Annand being introduced in 2016 and 2015.

Bob Annand, world-renowned Iris hybridizer, began growing and hybridizing Iris at age 10 in Santa Cruz, Ca. After his first success at growing Iris, Bob didn't want to sell them for money; he planted his Iris along HWY 101 to beautify the road for travelers. That has been Bob's philosophy for the past 79 years of creating these astonishing flowers. In his 79 years, Bob Annand hybridized, registered, and introduced over 50 Irises. At the time of his death December 2013, Bob left 90 seedlings with which to continue his legacy of contributing to the Iris world. Bob had won over 50 awards from every species imaginable, including the Wm Mohr Medal in 2001 for best AB. This year Bob's wife, Irene, will be presented yet another national award in Portland for the best AB called "Kalifa's Joy". There were many occasions Bob would let a seedling continue growing for 4 years before introducing the flower because he wanted to prove the Irises reliability and consistency of traits. Continue to look forward to many more of Bob Annand's introductions even though he has left this earth. He was truly worthy of such recognition.

Read one of many articles about Bob Annand
Click here to read the article.